Starless – Hope Is Leaving You

Chicago atmospheric post-rock outfit STARLESS, featuring past and current members of Beak, Timeout Drawer, Our Earth Is A Tomb, and more, released their hypnotic Hope Is Leaving You full-length on September 10th.

Jon Slusher and Jessie Ambriz formed the band in 2014 and arrived at the current and most prodigious lineup in 2016 when joined by Quinn Curren and Alan Strathmann. All veterans of various music scenes, they found a common thread in the grim and mournful, seeking a means to express a transcendence of the crushing gravity of a chaotic world.

Recorded in 2019 at Electrical Audio and Palisades by Sanford Parker (Pelican, Eyehategod, Wrekmeister Harmonies, Planes Mistaken for Stars) and mixed at Parker’s own Hypercube by Parker and mastered at The Boiler Room by Colin Jordan (Helen Money, Spirit Adrift, The Lion’s Daughter etc.), Hope is Leaving You, is the second full-length release by this lineup. A more dynamic and progressive departure from 2016’s Deadly Light, Hope Is Leaving You focuses on songs about the human condition, manipulated by blind colossal forces of nature. Sometimes tribal, sometimes in isolation, motifs search within worlds of darkness and beauty.

Chrome Waves – The Rain Will Cleanse

Their third album, released through Transcending Records and Disorder Recordings.

Recorded at Postal Recording by Tyler Watkins and Disorder Recordings by Jeff Wilson, and mixed and mastered by Watkins at Postal, The Rain Will Cleanse is completed with cover artwork by Rebecca Dunski and photos by Luke Steffens.

Lost In Translation, the much anticipated follow up to The Garden Of Earthly Delights, Features bassist André Carvalho With José Soares (saxophone), André Matos (guitar), & Special Guest, João Almeida (trumpet). It is released on Outside In Music.

Musically, the song cycle that comprises Lost In Translation was also born from the influences that Carvalho has absorbed in recent years, including being part of the New York City jazz scene, which continues to leave a huge impression on the bassist, and also regular travel for performances to many countries. As a composer, Carvalho’s relentless search for new sounds has led him to discover and explore musical avenues such as improvised music, experimental and contemporary classical music. Lost in Translation embraces the unknown, by having a very strong improvisational and spontaneous component, making each performance completely unique to this ensemble, and this recording

As a band who has been around for thirteen years and toured all corners of the world, there comes a point when the veil of mystique must be fully lifted. Up until now, experimental rockers SUUNS have revelled in mystery like a silhouette disappearing into the mist, releasing albums that rest comfortably in ambiguity, detachment and innuendo. But lately, the band appears to be more comfortable coming clean with their own inner workings. That newfound sense of ease is undeniable on SUUNS’ fifth full-length album The Witness – their first for Joyful Noise Recordings.

Self-recorded and self-produced over the majority of 2020 – a year of strife, solitude and reflection –The Witness finds the band holding a magnifying glass over their own default state of playing and performing. It’s a swift departure from previous album Felt, which harvested haphazard ideas in their embryonic, demoed versions, as if letting loose a glorious fireworks display into the heavens. The Witness, meanwhile, pours SUUNS’ music into a more intricate mould, compelling the band to embrace the vibrancy of their live performances and urging vocalist Ben Shemie to approach his lyricism with unabashed directness.

Acoustic guitars, kick drums, harmonicas, found instruments and their voices are deployed with verve and passion on songs concerning the frailty of human existence, the awesomeness of nature and other fun things. This is their debut album.

In 2015 and 2016 Ian Moss and Moff Skellington put together the first in a series of joint collaborations under the working name Moss Skellington. Two singles and one album were released. The release brings those releases together in one expanded edition. This trans-Pennine collaboration includes elements from both artists solo work into a fascinating marriage of sounds and words that defines genre categorisation. The nearest comparisons would be with bands like The Residents, married with the rhythmic invention of Eno period Talking Heads The album is dominated by the 17 minute piece called “Mouse Engine” which received only one live performance in Leeds to a sparse crowd in a small room above a pub. Production and mixing was provided by fellow German Shepherd Artist Space Museum.

A dub studio album produced and engineered by Lee “Scratch” Perry, credited to his studio band The Upsetters. In Jamaica, the album was released under the name Scratch the Super Ape in July 1976 on Perry’s own Upsetter label. The Jamaican version had a different track order than the international version that was released in August the same year on Island Records.

Ghosts of Jupiter – Keepers of the Newborn Green

Boston-based band Ghosts of Jupiter have released their third full-length independent release titled Keepers of the Newborn Green. The neo-psychedelic offering features ten songs mixed and engineered by the band’s bassist Thomas Lada, who utilized the band’s mobile and home recording equipment during the pandemic in 2020. The album’s spine was recorded in Allston, Mass. by drummer Tom Arey; all other musical elements were complied remotely.

Keepers of the Newborn Green is a fascinating compilation of sound that musically reflects on modern times by juxtaposing medieval folk themes and electronic effects. The second track, titled “Villans,” does this especially well and aims to “critique the toxic segmented realities created by modern media,” according to singer-composer and multi-instrumentalist Nate Wilson, who leads the band, and sings ethereal melodies doused in lyrical mysticism to exemplify that reality.

The Kundalini Genie – Half In, Half Out

Scottish psychedelic rock’n’roll outfit The Kundalini Genie has announced they will release their fifth studio album ‘Half In, Half Out’ by the end of 2021, following up their ’11:11′ album via Space Ranch Records (Europe) and Little Cloud Records (USA) in 2020. Ahead of this, they present the title track ‘Half In, Half Out’, a powerful offering to whet our
appetites in the lead-up to this long-player, mixed by Jason Shaw (Cambodian Space Project, Frankie Teardrop, Sonic Jesus, Aerofall) and mastered by RIDE’s Mark Gardener at OX4 Sound Studio in Oxford. Emerging from the nether regions of Glasgow, The Kundalini Genie has been blowing minds globally with music characterized by droning hypnotic fuzz rock, 60’s British Invasion-inspired melodies, transcendental sitar, and dreamy, spaced out soundscapes.
The Kundalini Genie is focused around singer-songwriter Robbie Wilson (sitar, guitar, vocals) and also involves Jason Houston (guitar, vocals), Melissa Rennie (guitar, keys, vocals), Lloyd Ledingham (bass, vocals), Louis Martin (guitar, vocals) and Grant Robertson (drums).

Based within the industrial panorama of Berlin, The Usual Boys emerge as the city’s fresh-faced pointers for the boisterous revival of 70s rock meets 80s new wave. Having recently released their sultry rendition of The Modern Lovers’ Roadrunner, the four-piece is now ready to offer their newest single, First Date. The Usual Boys are different fruits hanging from the same tree. Individually hailing from the UK, Finland and Sweden, the group had its genesis in 2017 on arriving at their German rendezvous. Despite growing up in worlds apart, they were unified by a shared mission to cut through the noise and breathe life back into the indie-rock landscape.

Equally inspired by the white heat of disco as the perverted dirge of the Berlin club scene, The Usual Boys’ repertoire is riveting. Cut with angular high-end and bone-shaking bass, a dark yet playful take on a young man’s ascent into adulthood is underpinned throughout. In this track The Usual Boys tantalise with Western cinema inspired guitar, reminiscent of the jangly phrases of The Shadows. Between the sharp snaps of drum and off-kilter appendages, the track clocks in at a minute and a half. Despite its short stature, First Dates doesn’t lack in manifesting an inescapable sense of doom. And much like the inevitable ill-fate of a Mexican standoff, the track details the unfavourable situation of an underwhelming first date.

Dave Graney and Clare Moore – Everything Was Funny 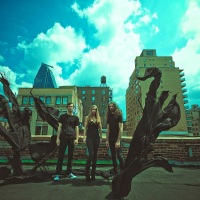 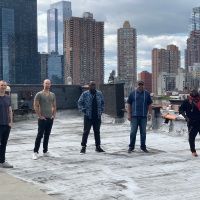