Benny Rubin, Jr, a talented tenor and alto-saxophonist, made a strong impression with his debut release What’s Next. His second set as a leader, Know Say Or See, covers a lot of ground and features the saxophonist at his best at the head of a talented young quartet comprised of pianist Lex Korten, bassist Adam Olszewski and drummer JK Kim. The group performs six of Rubin’s originals plus fresh versions of two standards.

“Know” opens the set with some unaccompanied playing by Rubin on tenor before it becomes a slow blues. Rubin shows a great deal of restraint and honest feeling as he builds up his solo. “Say” finds him playing fairly free on tenor. Korten takes a particularly explorative piano solo as the quartet constructs an avant-garde but very coherent improvisation. In contrast, on “Darn That Dream” Rubin creates a melodic solo, letting the melody breathe and showing a great deal of maturity in his quietly passionate playing. “NYC Urge” is an original based on Joe Henderson’s “Inner Urge” that uses a repeated phrase on alto that inspires creative solos. Horace Silver’s lesser-known “Kiss Me Right” is taken as a straight-ahead swinger that gives each of the musicians an opportunity to star. “Flint Water Crisis” is as serious as its title with Rubin’s tenor playing becoming gradually more intense as the piece evolves. On the last two selections, “Down They Go” and “Or See,” the musicians create a spiritual atmosphere that will remind some of John Coltrane, but with more modern touches and played in the musicians’ individual voices.

Born in Flint, Michigan and raised in Detroit, Benny Rubin Jr. gained early experience playing saxophone in church. He discovered jazz, graduated from the Detroit School of Arts, and worked locally with many top local musicians including Wendell Harrison, performing at the 2016 Detroit Jazz Festival with the Detroit Jazz Festival Youth All-Stars. He recorded his first album in 2017 (What’s Next) and moved to New York to attend the New School of Performing Arts. He has since worked with Adam Rudolph, Lonnie Plaxico, Danny Mixon, Antoinette Montague and the Harlem Society Orchestra. Henhas also been leading his own quartet, playing a regular residency at the Sound Bite, a jazz club in Hell’s Kitchen.

To be featured on World of 424

The album is Self Released 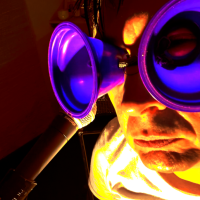